How does a geothermal well work?

Two holes have to be drilled in the ground in order to create a functional geothermal well. These wells are in fact two long tubes that extend more than 1950 metres into the ground. The last 100 to 150 metres of the tubes feature sieve-like openings (screens) through which the hot water present in the ground can flow into the tube. The water pressure at this extreme depth causes the water in the tube to rise to approximately 50 metres below ground level.

A special pump is installed in one of the tubes (the production well) at a depth of approximately 400 metres. That pump, which is submerged in more than 350 metres of water, pumps the hot water to the surface. Next, the hot water is pumped to the geothermal boiler system, which is installed alongside Tuinderij Vahl’s company facility. A heat exchanger extracts the heat energy from the water and the resulting hot water flows to the greenhouses.

The cold water (at approximately 35 degrees Celsius) is returned via the other well (the injection well) to the same layer from which it was originally extracted. A geothermal well has a minimum useful life of 30 years before the water cools down. 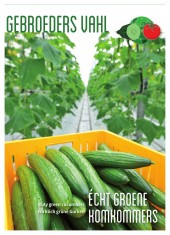